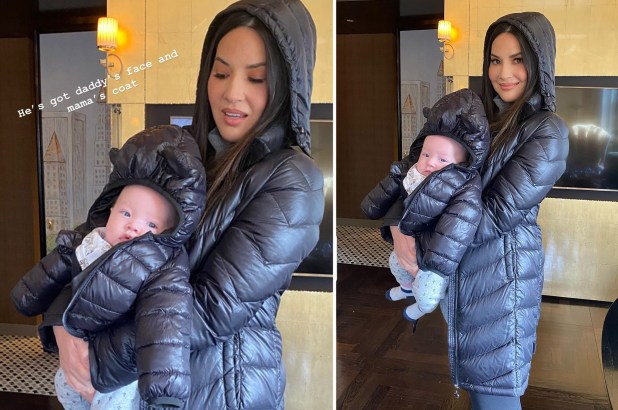 On Saturday, Olivia Munn shared an adorable snap of herself holding son, Malcolm with both wearing black puffy jackets.

“Matching puffers,” she wrote alongside it, prompting an outpouring of kvelling from celeb pals.

“I’m so happy for you mama,” Rosanna Arquette wrote, while Mindy Kaling cooed, “Omg this guy.”

Also posting the photo to her Instagram Story, she wrote, “He’s got daddy’s face and mama’s coat.”

“The Newsroom” star, 41, shares 3-month-old Malcolm with comedian John Mulaney, 39. The first-time parents have not been shy about posting sweet photos of their son on social media.

Earlier this month, Munn shared some photos of Malcolm and Mulaney getting cozy with the “Kid Gorgeous” star giving a smooch on their baby’s head.

“Did someone order a marshmallow?” she, captioned another photo of Mulaney, holding his son, adding the Stay Puft marshmallow man from “Ghostbusters.”

To celebrate Malcolm turning two months old, Mulaney shared a slideshow of photos writing “Happy Birthday to the tiny man who has been stuck to me for two months. Whoever you are sir, you sure are a fun companion.”

Munn has also been open about her struggles as a new mom, discussing her tribulations with breastfeeding.

“Breastfeeding is soooo hard, especially if you have low supply,” she shared on social media in January. “8 weeks in and I’ve taken a million vitamins, countless teas, lozenges, tinctures, and worked with two lactation consultants. Breastfeeding. Is. Hard.”

Mulaney and Munn started dating in early 2021 amid his divorce from his wife of seven years, Anna Marie Tendler.