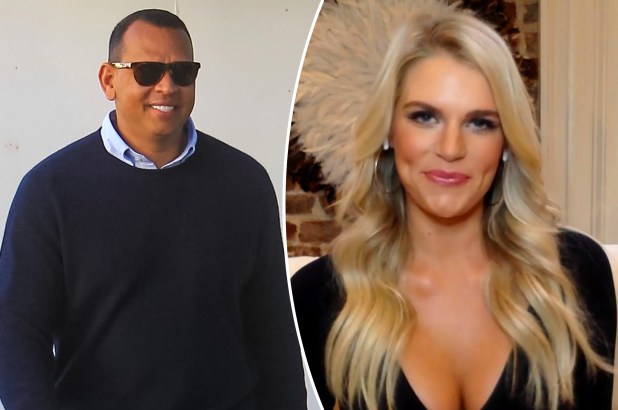 Alex Rodriguez and Madison LeCroy randomly ran into each other in New York City.
Getty Images

Madison LeCroy and Alex Rodriguez had an unexpected run-in on the streets of New York City on Friday afternoon, Page Six has exclusively learned.

We’re told LeCroy was wedding dress shopping at Vera Wang for her upcoming nuptials, and upon leaving, she was greeted by a group of Rodriguez fans and photographers.

“She just walked across the street out of Vera Wang, and she was standing on the street corner, and he was five feet away from her,” a spy tells us.

“She turned to see who it was, and she saw he was getting paparazzi shots right next to her.”

We’re told that the two didn’t exchange pleasantries, but they “100 percent” saw each other.

The “Southern Charm” star, 31, and the former MLB player, 46, made headlines last February after Rodriguez was accused of sliding into LeCroy’s DMs and partaking in flirty FaceTime sessions with LeCroy while engaged to Jennifer Lopez.

LeCroy eventually addressed the rumors and claimed that the two never met in person and only spoke on the phone.

“He’s never physically cheated on his fiancée with me,” she told Page Six at the time. She added that the two adding had only “spoken on the phone” but had “never been physical … never had any kind of anything. Just an acquaintance.”

One month after the allegations surfaced, Lopez and Rodriguez called off their engagement. Lopez has since moved on and rekindled her romance with with Ben Affleck.

Meanwhile, LeCroy has been busy planning her wedding to her fiancé Brett, whom she got engaged to in October. The mom of one previously explained that she’s aiming for a destination wedding in December.