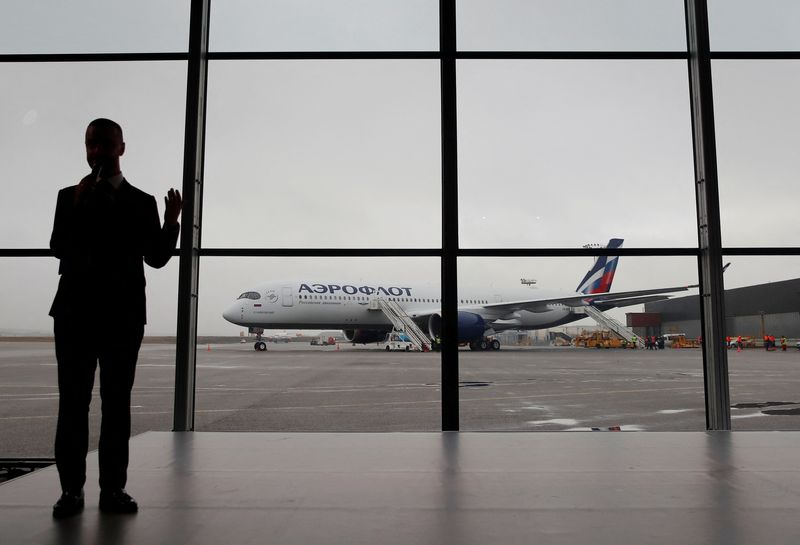 By Allison Lampert and David Shepardson

(Reuters) -European nations and Canada moved on Sunday to shut their airspace to Russian aircraft, an unprecedented step aimed at pressuring President Vladimir Putin to end his invasion of Ukraine, the biggest attack on a European state since World War Two.

Aeroflot said it would cancel all flights to European destinations after E.U. foreign policy chief Josep Borrell said the European Union had decided to close its airspace to Russian traffic.

The United States is considering similar action, but has yet to make a final decision, according to U.S. officials. The U.S. government said citizens should consider leaving Russia immediately on commercial flights, citing an increasing number of airlines cancelling flights as countries closed their airspace to Russia.

The ban on Russian jets comes as the airline industry continues to grapple with the fallout from the COVID-19 pandemic that is still undermining global demand for travel.

Germany, Spain and France joined Britain, the Nordics and Baltic states in declaring bans on Russian use of their airspace, a major escalation in a tactic by mostly NATO allies to wage economic war against Putin in retaliation for the invasion.

Russia is now widely expected to retaliate further against the air blockades and other sanctions. It has already responded to the earliest European airspace bans with its own edicts barring airlines from Britain, Bulgaria and Poland.

Without access to Russia’s airways, experts say carriers will have to divert flights south while also avoiding areas of tension in the Middle East.

A reciprocal airspace ban by Russia and the United States would cause longer flight times for U.S. carriers and could require crew changes on East Coast routes to Asia, said U.S.-based analyst Robert Mann of R.W. Mann & Company, Inc.

It could make certain flights too costly to operate for U.S. carriers. “It would just add a lot of expense,” he said.

France on Sunday evening said it was shutting its airspace to all Russian aircraft and airlines, in an announcement echoed across continental Europe.

The closure of European airspace to Russian airlines and vice versa had immediate impacts on global aviation.

Finnair said it would cancel flights to Russia, Japan, South Korea and China through March 6 as it avoided Russian airspace, though flights to Singapore, Thailand and India would continue with an added hour of flight time.

If U.S. airlines were barred from Russian airspace, it would lengthen some international flights and some would likely be forced to refuel in Anchorage, industry sources told Reuters. The flights that could be impacted include U.S. flights to India, China, Japan and Korea, the sources said.

The White House National Security Council declined to comment on whether the United States will close its skies to Russia and referred questions to the Federal Aviation Administration, which did not immediately comment.

Canada also said it had shut its airspace to Russian aircraft effective immediately.

There were no direct flights between Russia and Canada but several Russian flights a day had used Canadian airspace.

An Aeroflot flight from Miami to Moscow passed through Canadian airspace on Sunday after the ban was announced, according to flight tracking website FlightRadar24.

A spokesperson for Canada’s transport minister said air traffic control manager NAV Canada had mistakenly permitted a banned aircraft into Canadian airspace and steps were being taken to ensure it did not happen again.

Transport Canada said it was launching a review into the conduct of Aeroflot and NAV Canada leading up to the violation.

U.S.-based United Parcel Service Inc (NYSE:) and FedEx Corp (NYSE:), two of the world’s largest logistics companies, have said they are halting deliveries to destinations in Russia. It was unclear whether both firms continue to use Russian airspace as part of their general operations. Neither responded immediately to requests for comment.

Asian aircraft lessor BOC Aviation said on Monday that E.U. sanctions requiring the termination of leases to Russian airlines by March 28 would affect most of its aircraft in Russia.

The sanctions are a setback for the leasing industry after Russian carriers were seen as more reliable performers on jet rental agreements than many global carriers during the pandemic.

Russian companies have 980 passenger jets in service, of which 777 are leased, according to analytics firm Cirium. Of these, two thirds, or 515 jets, with an estimated market value of about $10 billion, are rented from foreign firms.