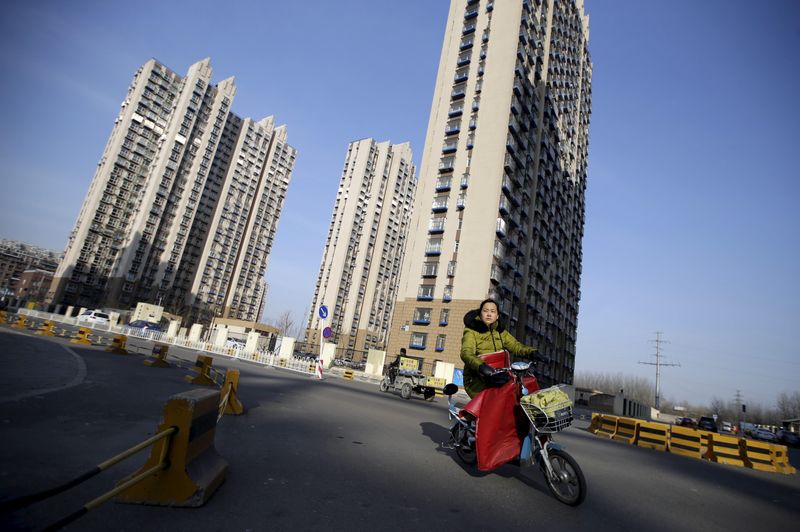 BEIJING (Reuters) – China’s new home prices rose for the first time since September on a monthly basis, official data for January showed on Monday, as efforts to soften the blow from tough regulatory curbs on property supported buyer sentiment, particularly in big cities.

Average new home prices in China’s 70 major cities climbed 0.1% from a month earlier in January, compared with a 0.2% drop in December, according to Reuters calculations from data released by the National Bureau of Statistics (NBS).

China’s property market, accounting for a quarter of gross domestic product by some metrics, has slowed due to Beijing’s push to cut leverage in the sector amid defaults at heavily-indebted players such as China Evergrande Group.

To ease the pain for developers, authorities have taken a slew of measures since late 2021, including giving real estate firms easier access to funds from escrowed accounts.

“The marginal improvement in the financial and credit environment since the fourth quarter of last year helped the value of transactions to bottom out,” said Xu Xiaole, analyst at Beike Research Institute.

Credit conditions are expected to continue to ease, which would help lift transactions and stabilise home prices, Xu said.

Overall new bank lending more than tripled in January from the previous month. Chinese lenders tend to front-load loans at the start of the year to get higher-quality customers and win market share.

The number of cities reporting price gains rose to 28 from 15 in December, driven mainly by the larger tier-one and tier-two cities.

Average prices of new housing in the country’s four largest cities – Beijing, Shanghai, Guangzhou and Shenzhen – swung from a month-on-month decrease of 0.1% in December to an increase of 0.6% in January, the NBS said in a separate statement.

The biggest swing was seen in Guangzhou, where prices rose 0.5% from a 0.6% decline.

“The rise in tier-one cities has less to do with seasonal factors and more due to purchasing power amid (easing) credit policies in place,” said Yan Yuejin, research director of Shanghai-based E-house China Research and Development Institution.

Last month, developers in Shenzhen and Beijing took some measures to boost sales, offering buyers a 1% discount for cash payments.

Though easing measures are helping, new home prices rose at the slowest pace of 2.3% since December 2015 from a year earlier, narrowing from the 2.6% growth recorded in December.

The central government, while keeping curbs on speculative purchases and blind borrowing, is expected to roll out more measures to support buyer sentiment, which has sharply weakened due to the liquidity crisis faced by developers.

A handful of cities not constrained by regulatory restrictions on purchases are starting to relax downpayment rules for home purchases in a bid to stoke buyer interest.

“The market is expected to gradually stabilise in March or April,” said Zhang Dawei, chief analyst with property agency Centaline.

“First- and second-tier cities will be the first to come out of the downturn.”