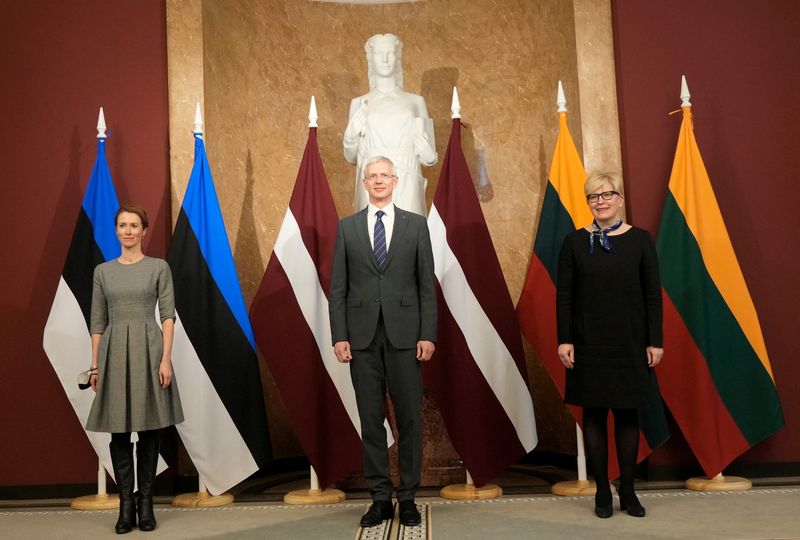 VILNIUS (Reuters) – The European Union must impose sanctions on Russia immediately after it recognised two Ukrainian breakaway regions as independent, the governments of the Baltic states of Estonia, Latvia and Lithuania said after Russia’s announcement.

Russian President Vladimir Putin recognised the Donetsk and Luhansk regions in eastern Ukraine as independent entities on Monday, upping the ante in a crisis the West fears could unleash a major war.

The three Baltic states, unlike Ukraine, are all members of NATO and the European Union.

“I remain convinced such a course of escalation should be met with sanctions,” his Lithuanian counterpart Gabrielius Landsbergis wrote in a tweet.

In a joint statement, Rinkevics and Latvia’s president and prime minister called on the international community “to take the strongest possible measures to stop Russia’s aggression and offer assistance to Ukraine”.

Separately, Estonia’s president called on the European Union to impose sanctions for what he called the “gross and unjustifiable trampling on international law”.

Lithuania’s speaker of parliament will table a parliamentary motion to “never recognize” any change of status of the breakaway region, she said on Monday.

The Baltic States said on Jan. 21 they will provide Ukraine with U.S.-made anti-armour and anti-aircraft missiles, days after receiving clearance from the U.S. State Department to send U.S.-made missiles and other weapons there.

The foreign ministers of the three Baltic countries plan to visit Ukraine together later this week in a show of solidarity.