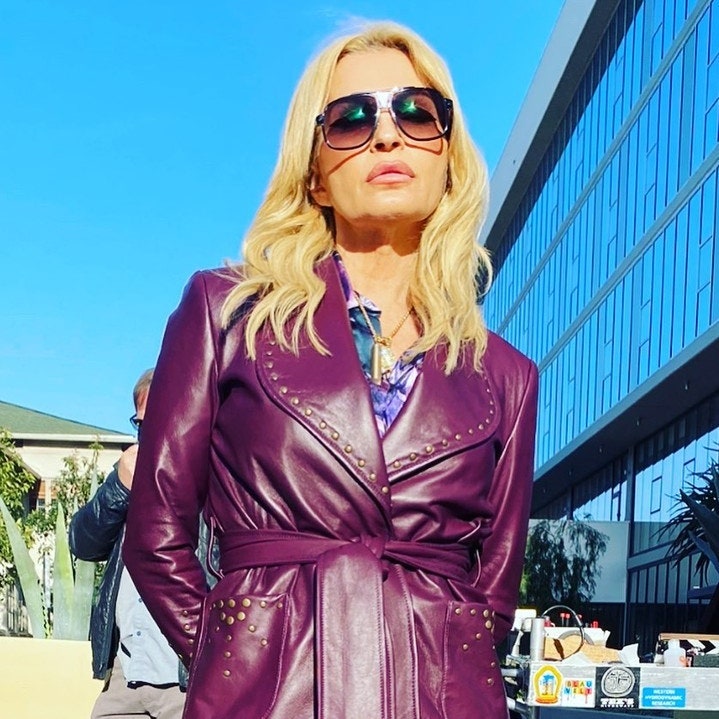 Viewers of the series immediately gravitated to the character, played by Kathrine Narducci. Clips of Fezco’s grandmother went viral on TikTok, scored by songs like “These Boots Were Made for Walking.” Narducci understands her character’s potency. “It is a young audience,” she says about how her character resonates with younger viewers. “I think it is because it is such an empowered woman who is doing shit her own way and doesn’t give a shit. That suit is a power suit and that suit made me feel so powerful.”

The suits were created specifically for Narducci’s character by Amber Doyle, a longtime custom tailor to the stars. “They didn’t just get things from the rack!” says Narducci. The suits set the tone for that raging Meemaw fatale energy, which continues throughout, along with a studded cowboy shirt and black flares with a thick metal belt cinched so tight you would think she will burst out of it, a sleeveless halter that shows off her tattoos, and a floral print top buttoned to put her whole chest on display. Her wrist flexes a Rolex watch and her hands are laden with metal rings: a babe version of brass knuckles.

At first glance, Fezco’s grandma’s look is reminiscent of something Dolly Parton would wear if she was more familiar with a tire iron than a guitar. Everything is tight and unforgiving, meticulously tailored, and manicured with flash. Aside from Dolly, we’ve seen other women dress this way before in similar roles. On Instagram, director Joshua Michael Paulin pointed out on Instagram that the plot of Fezco and his protective, violent grandmother was similar to the 1980 film Gloria, which stars Gena Rowlands as a vengeful granny. Gloria also has bodacious style, wearing fuchsia print shirts, metallic skirt suits, and necklaces dangling on her cleavage.

While Gloria has her fabulous showy moments, Fezco’s grandmother reaches a gloriously trashy level and exists in the same IDGAF universe as the teenagers in Euphoria. “On the inside, [Euphoria’s teen characters] are all crumbling and so is she—she is trying to raise two kids—but on the outside, we are all trying to make it work,” says Narducci. “The outside is the facade, especially with her [Fezco’s grandmother]. She is dressed to intimidate. I am walking in that club and I am dressed to intimidate, and when I had that other leather outfit on to beat that guy with the crowbar….those clothes helped me to move forward and get what I wanted.” In a way, she is on par with Maddy or Jules, who are totally unafraid to take style risks. Then again, I don’t even think the concept of “risk” enters the brain of Fezco’s grandmother, whether she is wielding a tire iron or simply getting dressed.