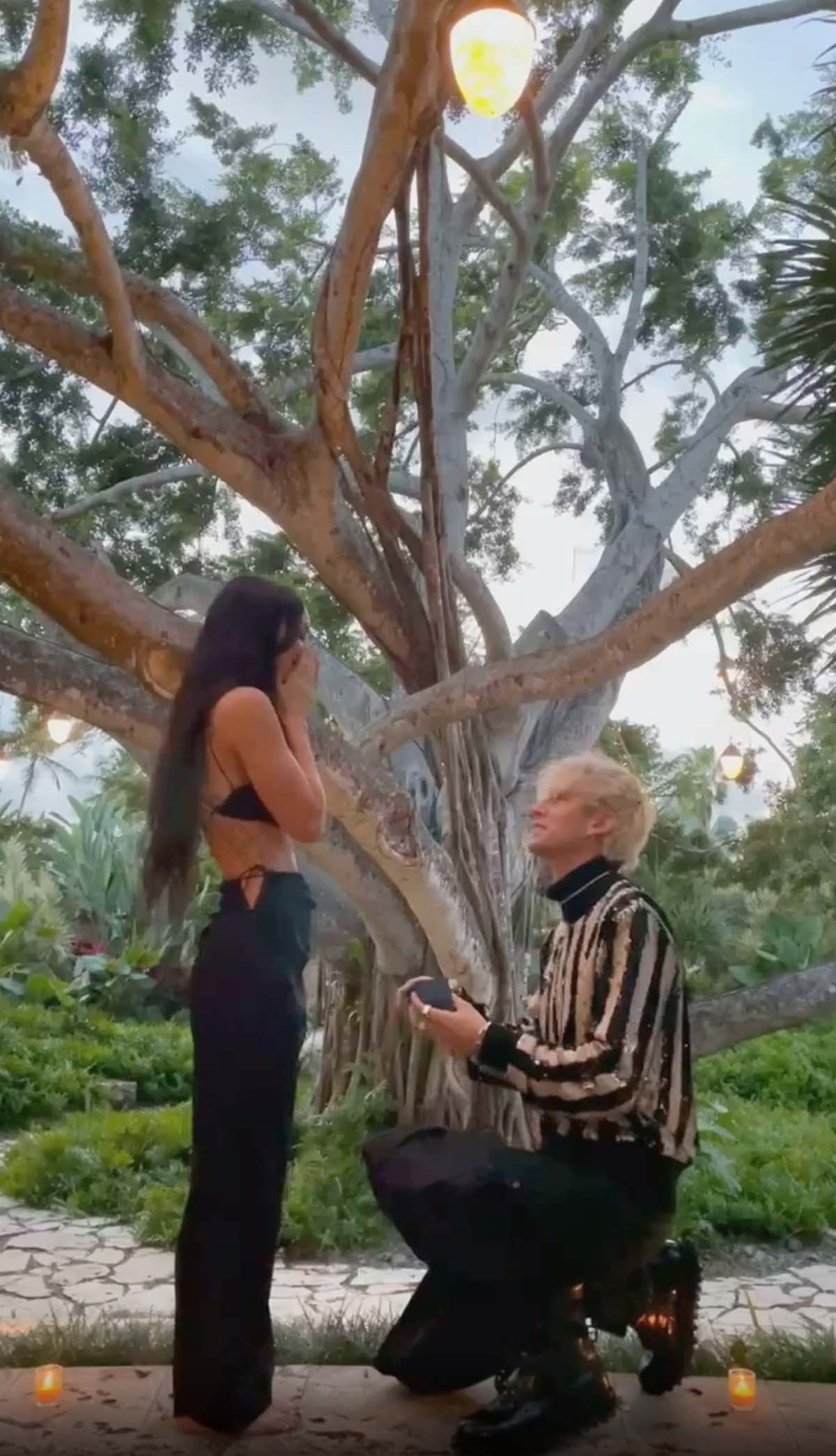 Doing it their way! After getting down on one knee, Machine Gun Kelly shared the sentimental reason he proposed to Megan Fox with two-stone engagement ring.

“I know tradition is one ring, but I designed it with Stephen Webster to be two,” the 31-year-old musician wrote via Instagram on Wednesday, January 12, one day after he popped the question.

The Dirt actor explained that the emerald stone, which is Fox’s birthstone, and the diamond, which is his, are “set on two magnetic bands of thorns that draw together as two halves of the same soul forming the obscure heart that is our love.”

Kelly, whose real name is Colson Baker, shared a close-up video of the sparkler, which features two pearl-shaped gems on one band, while confirming the engagement.

“Toi et Moi (two stone) rings have been a huge trend over the past two years,” gemologist Olivia Landeau told Us Weekly in a statement on Wednesday. “Her stones look to be around 2-2.5ct each in size,” the Clear Cut founder explained, noting that depending on the quality, a similar ring could cost from $50,000 to $75,000.

“’Yes, in this life and every life’ 💍,” the “Bloody Valentine” rapper captioned the ring video. “Beneath the same branches we fell in love under, I brought her back to ask her to marry me.”

The Jennifer’s Body actress, 35, also shared the news via her Instagram profile, posting a clip of the romantic moment when Kelly asked her to marry him.

“In July of 2020 we sat under this banyan tree,” she explained. “We asked for magic. We were oblivious to the pain we would face together in such a short, frenetic period of time.”

The New Girl alum, who met her now-fiancé on the set of Midnight in the Switchgrass in March 2020, explained that they were “unaware of the work and sacrifices the relationship would require from us but intoxicated off of the love. And the karma.”

Fox noted that after walking through “hell together and having laughed more than I ever imagined possible, he asked me to marry him” one a half years after they originally stood under the mystical tree.

The Transformers actress was previously married to Brian Austin Green. The Beverly Hills, 90210, alum, 48, announced their split in May 2020 after 10 years of marriage. Their divorce is still in the process of being finalized.

The exes, who share sons Noah, 9, Bodhi, 7, and Journey, 5, both moved on that same year, with Fox and Kelly’s friendship growing into a romantic relationship by June 2020. Green, for his part, started dating Sharna Burgess in December 2020.

After less than one year of dating, a source exclusively told Us in February 2021 that the “Drunk Face” singer would marry Fox “in a heartbeat,” but the Till Death actress was “in any rush” to tie the knot again.

Five months later, the Tennessee native told Who What Wear that when she met Kelly “I knew instantly that this is a soul I’ve traveled with before, that this was a soul-mate connection, and that there was a purpose here.”