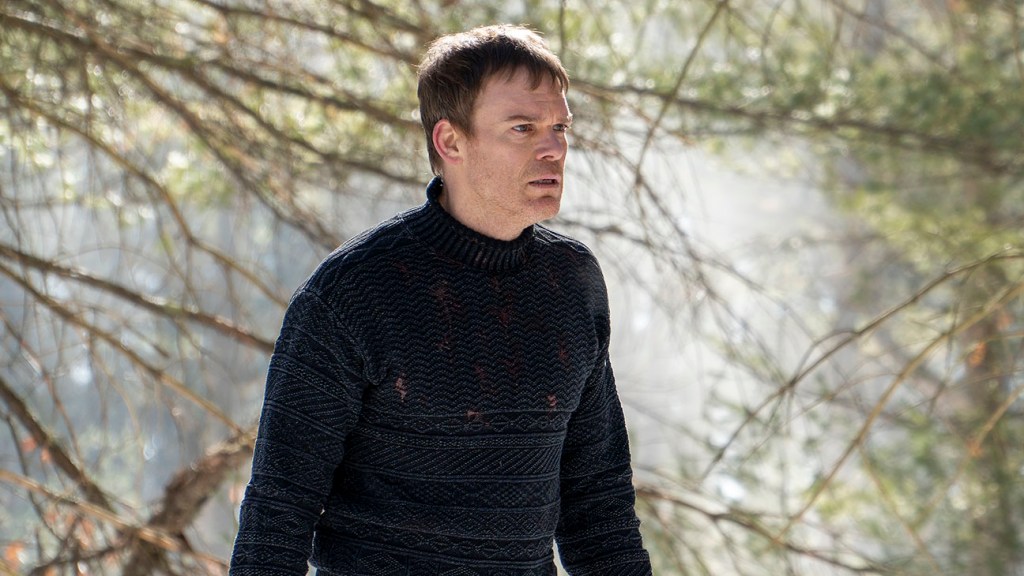 [This story contains spoilers from the Dexter: New Blood finale.]

When Showtime’s Dexter wrapped its original eight-season run in late 2013, then-showrunner Scott Buck wanted to leave the ending up to the audience. The result, as Michael C. Hall’s serial killer with a code traded Miami Metro for a lumberjack life in exile, was one of the most critically panned series finales of all time.  “We didn’t do it justice in the end,” Showtime entertainment president Gary Levine recently proclaimed.

Clyde Phillips — who served as showrunner before departing at the end of season four — made no secret that the September 2013 episode was not how he would have ended the show. Phillips has maintained for years that he envisioned a series ender in which Dexter faced up to his crimes while awaiting execution on Death Row.

With Dexter: New Blood, Phillips hopes he was able to rewrite Dexter’s much maligned “first finale” with a definitive ending for Hall’s Dexter Morgan. While Showtime had tried mounting a Dexter revival for years since the show’s initial conclusion, it was Phillips who pitched Hall and the network that the famed anti-hero would end the limited series in his own blood. “This was inevitable,” Phillips tells The Hollywood Reporter about his decision kill Dexter.

New Blood explored the relationship between fathers and sons as Dexter learned of Harrison’s (Jack Alcott) own Dark Passenger and, despite objections from his late sister, Deb (Jennifer Carpenter), teaches the teen the code that is the Morgan family business. At the same time, local sheriff Angela (Julia Jones) connects the dots and collars Dexter as the real Bay Harbor Butcher. Backed into a corner, Dexter kills off Harrison’s beloved wrestling coach/deputy Logan (Alano Miller) in a bid to escape extradition to Florida and the Death Penalty.

Harrison, who initially considered his father a superhero for killing bad guys, ultimately channels the words Dexter wrote in his letter leaving his son to Hannah (Yvonne Strahovski) after he faked his own death in the 2013 finale: “Let me die so my son can live.” Facing death at the hands of his own son, Dexter talks Harrison through pulling the trigger.

Below, Phillips opens up about the redemption journey behind the Dexter: New Blood series finale, why Harrison had to pull the trigger and the future of the franchise.

How early in the creation of Dexter: New Blood did you know that Dexter would die? And why did you want this to end with his death?

Very early in the process. In talking with Michael and Showtime and once I hired a writers room, I presented that to them and asked for the best way to do this. We owed it to the audience. After the bad taste in their mouth that a lot of people had at the end of season eight — what we’re calling the “first finale” — we knew that to have Dexter escape and have him continue doing this, the show was done. The storytelling of it was done. The legitimacy, honesty, dignity and integrity of the character of Dexter that we so carefully built up over a almost a decade almost required that we end the show this way. We wanted the viewers to hopefully be sad by this loss and feel satisfied and to understand that this had to happen; that this was inevitable. Hopefully they’re satisfied with the storytelling. … At the end [of the final scene], I remember Michael calling out from 10 yards away, “Thanks for the words, Clyde.” What better feeling can a writer have than that?

Talk me through the decision to have Harrison effectively carry out Dexter’s wishes — “let me die so my son can live,” which is something Dexter wrote to Hannah when he left Harrison with her.

The germ of all of that is that Dexter is making the ultimate sacrifice for his son. Dexter says as he’s urging Harrison to do it, “Remember, you have to take off the safety just like I showed you.” He’s giving Harrison permission and saying there’s no other way. And Harrison says with tears streaming down his face, “For both of us.” They’re trapped in this. When Harrison yells, “Open your eyes and and look at what you’ve done!” and we do the flashback of Lundy (Keith Carradine), Doakes (Erik King), Rita (Julie Benz), Deb and LaGuerta (Lauren Vélez), that’s an Easter Egg. That’s the first thing that Dexter says in the pilot when he’s killing a choir master and he screams at him, “Open your eyes and look at what you’ve done; look at the truth!” It was like bringing back “Hello, Dexter Morgan,” a few times that was left over from the Trinity Killer with John Lithgow.

Was it always the plan to have Harrison — who carries Dexter’s letter to Hannah with him — be the one to kill him? Harrison, in the episode prior, went from learning the code and thinking his father was a superhero to killing him.

Yes, it was always the intention to do that. There’s a phrase, not in a dangerous way, that I’ve learned from decades of therapy: “A son has to kill his father so that he can be his own man,” whether in it’s in business or in relationships or how you talk to your dad as you become a young adult. I had a pretty lousy father and fathers and sons is the theme of the season and the title of the last episode is “Sins of the Father.” Dexter finally understands that he indeed is a criminal. He’s a killer. Harrison brought this sort of teenage optimism to it in the previous episode where he says, “If we kill all these people, think of the thousands of lives that we’re saving.” Dexter never thought of that. Dexter was thinking about it as his code from Harry: don’t get caught, kill for good. Harrison, in his youthful optimism, comes up with the superhero part of that and that pleases Dexter but it also shows Dexter that there’s a way to bring Harrison on board.

When the flagship ended, you envisioned an ending for the series that sees Dexter about to be executed for his crimes. You flirted with that idea in this finale. Was there ever a point where you wanted to carry out that ending for the character?

No. It needed to be Harrison. It is complicated, messy and makes sense and paints us into a corner. This was the best idea. We talked about other stuff but kept landing back at the same place and you write to it. The ending was one of the most satisfying weeks I’ve had writing Dexter.

When I was watching the finale, my first thought was that Deb was right that Dexter should have kept his Dark Passenger from Harrison. Was this your effort to give Deb a better ending than her death in the first finale?

That wasn’t intentional. Deb, we had to remind ourselves, doesn’t exist. She’s that pixel in the corner that we all have in our head: she’s Dexter’s doubt. It had nothing to do with anything in the past. We were so lucky to get Jennifer back, she elevated everything.

You’ve said from the get-go that Dexter: New Blood ends Dexter’s story. But Harrison still very much has a story to tell: out on his own, both of his parents now dead and having been let go by the local sheriff. Is there more that you’d like to explore with Harrison? He still knows of The Code and has his own Dark Passenger.

Yes, there’s a lot I’d like to explore. I don’t have permission yet from Showtime to explore it. But if they were to call — much like Gary Levine called to do what became New Blood — and say we want to do Harrison, I’d drop everything and say yes in a minute.

Could Michael C. Hall ever embody the character of Dexter Morgan again, perhaps as Harrison’s version of Harry or even Deb? Or is this definitively the end of Michael as Dexter Morgan/Jim Lindsay?

I honestly don’t know. We’re talking about a hypothetical show here. My instinct is maybe once just to charge up Harrison and charge up the audience or maybe never. It’s either the best idea in the world or the most obvious idea in the world. If Showtime says yes and I can put together a writing room, that’s a question I’ll bring up to them. Right now, I just don’t know.

In the end, a small-town female cop cracks the Bay Harbor Butcher case. Why was this important to you? Why does Angela let Harrison go and call it in as an officer-involved shooting?

Her cop instincts are pushed aside for a moment and her maternal and humane instincts come forward. Look at all the death that she has seen in this episode: she just saw 30 bodies in Kurt’s tomb. Life is terrible and she has a chance to do something good. She knows Dexter killed Logan. It also complicates, in a surprising way, the storytelling. You don’t expect it and that’s another aspect of it being satisfying.

The finale featured a number of old faces, Doakes, LaGuerta, Rita, and the return of Angel Bautista (David Zayas). Was there anyone you wanted to return but couldn’t get?

No. Anybody we wanted, we got. I called John Lithgow and he was on a plane the next day. Anybody we invited back was too happy to come join us.

If this is truly the end of the Dexter franchise, what do you hope the larger legacy of the show is?

The legacy is the audience. I want the audience to say, “I was entertained; I learned something; I was stimulated; I was surprised; I was frightened and I’m satisfied.”

The first finale of Dexter ranks among — if not at the top of — the list of the worst series-enders of all time. Was redemption — and getting off of that list — in the back of your mind as you were crafting how New Blood ended?

Absolutely. We wanted to redeem ourselves. That ending in season eight left a bad taste in the audience’s mouth, which tarnished the legacy of a great show. I also wrote the finale of Showtime’s Nurse Jackie and it was a challenge. I wrote it with Tom Straw and it was a challenge to take Jackie (Edie Falco), who hurt so many people, and feel something for her. People don’t know if she actually died or not and we left it as an interactive thing. With Dexter: New Blood, [Dexter’s death] had to happen. I hope the audience feels shocked. I often watch audience reaction videos on YouTube and can’t wait to watch those for this episode. I think they’re going to lean to the side of awesome on this one.

Interview edited for length and clarity.