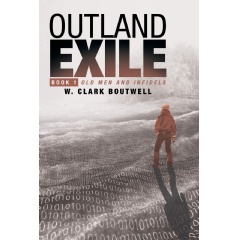 The award-winning series, set in future dystopian America, will be exhibited at the L.A. Times Festival of Books 2022.

The Los Angeles Times Festival of Books will return as an in-person event on April 23-24, 2022, at the USC campus. So, with the return of the festivities, fairgoers can expect a more colorful and lively festival  and more books. One series that booklovers should not miss is the political sci-fi novels of Old Men and Infidels by W. Clark Boutwell.

ReadersMagnet, a self-publishing and book-marketing company, will be displaying the award-winning books of Old Men and Infidels series at their exhibit.

Old Men and Infidels centers on aging, medical care, drug use, cybernetics, and faith in a future dystopian America. Boutwell wrote the series based on his observations that the world is getting older and younger. He observed that in much of the world, the average age has fallen dramatically, Fully half of their citizens  are too naïve to be reliable consumers of history, accepting only the stories they are told. In like manner, these same countries have dramatic increases in life expectancy. Rather than being caused by war, famine or pestilence, Boutwell attributes this to better food, better infant care and western intolerance to war.

Each of the three books currently in the Old Men and Infidels series has been well-received by readers and critics alike .

In Outland Exile, set in 2128, a utopia rules the East Coast of what was once the United States through an intrusive police state and rec-drugs, providing citizens with full employment, free healthcare and retirement at fortyonly to disappear. In the hardscrabble outlands, however, everyone expects to labor for most of their doubled lifespan. Lieutenant Malila Chiu, middle-aged at seventeen, becomes an unknowing pawn in the stealth coup détat of General Eustace Jourdaine and is banished to the lawless outlands as punishment. She is seized by the oldest man she has ever met, Jesse Johnstone (strangely also middle-aged at seventy-six), freeing her to become the Outland Exile.

In Exiles Escape, spies, CORE entities, poet-socialists, and fraks wrestle to escape their fates. Malila, struggling with the moral dilemma of her world and its illusion, attempts to return to the outlands to once more see the stars, enjoy an infants smile and hold the Old Mans hand. Jourdaine, becoming obsessed with her recapture¸ finalizes his plans for the conquest of the outlands, even as the outlanders send in Will Butler, their newest and only spy, to loot the databanks with the aid of his computer entity, Frog.

Exiles Escape received a Pinnacle award in sci-fi in 2018 and an honorable mention in Readers Favorite Awards for sci-fi in 2018.

War looms in the third installment, Malila of the Scorch. Malila emerges as an envoy for the sentient plants of the Scorch and tries to broker an alliance with the outlanders. When invasion catches everyone by surprise, the outlanders discover that they are not helpless before the onslaught, even as Jesse and Malila become convinced this battle will be their last.

Malila of the Scorch won a Book Excellence Award in 2020 in Sci-fi.

Order the Old Men and Infidels series of books by W. Clark Boutwell today on Amazon, Barnes & Noble, and the authors website https://www.oldmenandinfidels.com/

Malila of the Scorch

Born in Chicago and raised outside Philadelphia, Clark, a physician, has taught and practiced intensive care for newborn infants on four continents and eight countries, retiring after more than forty years on the job in 2020. He has been an avid solo hiker, backpacker, and climber since he was a mere lad of eleven. Some of his stories are even true.

He has traveled extensively to Rwanda, Kenya, India, Ecuador, Zambia, and Ghana as a volunteer physician at mission hospitals.

This news content may be integrated into any legitimate news gathering and publishing effort. Linking is permitted.