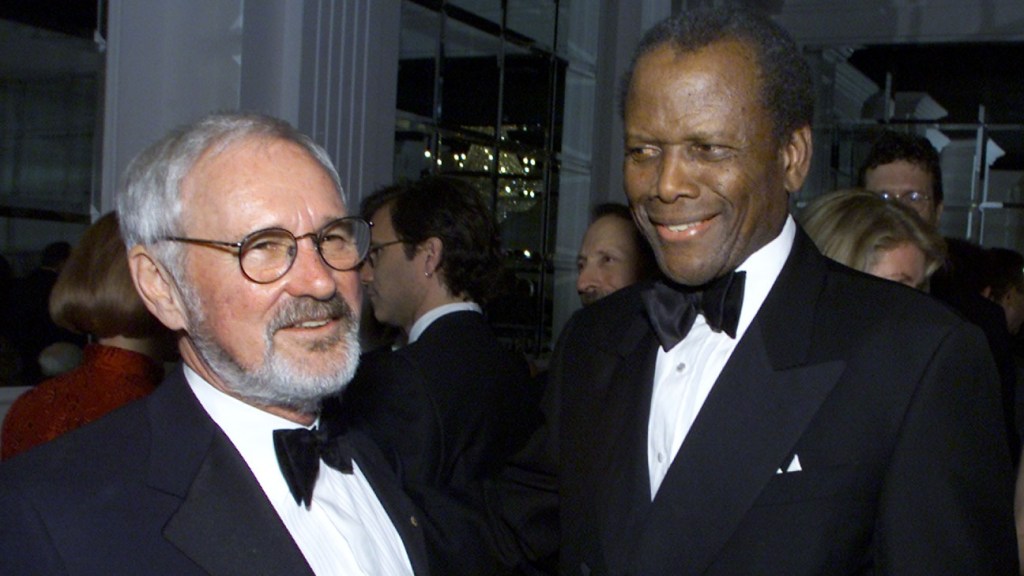 In the Heat of the Night director Norman Jewison is sharing his emotional memories of Sidney Poitier following the trailblazing Hollywood actor’s death Thursday at the age of 94.

“I was heartbroken. I knew he wasn’t well,” Jewison, 95, tells The Hollywood Reporter as he recalls an over-50-year friendship with Poitier and his wife, Joanna Shimkus.

As a young Canadian director, Jewison hired Poitier as the lead role for 1967’s In the Heat of the Night, a low-budget drama set in the South about a Black police detective from Philadelphia who gets caught up in a murder investigation. It went on to win five Oscars, including best picture, and featured Poitier playing Virgil Tibbs, opposite Rod Steiger as the racist Sheriff Gillespie.

The movie also led to a lifelong connection between the director and the star. “He was a personal friend as well as an actor,” Jewison recalls. “He was probably one of the most intelligent actors I ever worked with.”

Landing Poitier to play Tibbs wasn’t initially easy, given that the movie was filming amid the civil rights movement, and the actor didn’t want to shoot in Mississippi as first intended. In fact, Jewison remembers Poitier telling him point-blank during their first meeting that he had no intention of traveling south of the Mason-Dixon line, with Poitier explaining that he and Harry Belafonte had previously been harassed in Georgia while encouraging young people to vote. Jewison spent the next month scouting for an acceptable location, which he ultimately found in Sparta, Ill., near the Mississippi River.

Jewison feels that Poitier was right to be careful about where the project filmed. “After we’d been shooting for some weeks, I talked him into going South for four days while I shot some cotton-fields scenes that I couldn’t get in Illinois,” Jewison says. “When we went to this small town in Tennessee, there was only one hotel in town, and it had a sign on the door that said ‘Whites Only.’”

Instead, the entire cast and crew traveled to a nearby Holiday Inn, although this still didn’t spare them from racist harassment by locals. “I’ll never forget that first night,” the director remembers. “As we slept, pickup trucks came into the parking lot, honked their horns, and there was shouting and demonstrating, and I was really concerned.”

Jewison says he rang his key grip and asked for the biggest crew members to gather nearby and ensure no one would bother the star. “I then called Sidney’s room, and he was awake, as we all were, and I said, ‘Don’t worry Sidney. We got it under control. We’ll protect you. Everything will be fine,’” Jewison shares.

But according to the director, Poitier had already taken matters into his own hands. “He said, ‘I got a gun under my pillow, and I’m going to blow away the first guy that comes through that door,’” Jewison recalls.

Looking back, Jewison believes that not only will In the Heat of the Night be regarded as among the most important films from Poitier’s illustrious career, but that the pioneering actor’s intellect will be key to his legacy as well. “He analyzed the [Tibbs] part,” Jewison says. “And we could discuss it from an intellectual point of view, whereas Rod Steiger was a method actor and was just in the moment and was trained so differently.”

Although the pairing of actors proved to be an indelible one, Jewison remembers Poitier expressing reservations about Steiger’s performance. “It was great to see them work together, but Sidney was always kind of afraid that Rod was over the top,” the director says. “[Steiger] got out of a car at one point in a rage and slammed the door so hard that the car actually moved sideways. And Sidney looked at me and said, ‘Are you going to let him do that?’ I said, ‘Don’t worry about Rod. I’ll take care of Rod. You just concentrate on Virgil Tibbs and stay totally in character and don’t let him dominate you.’”

Jewison also singles out a key scene in the movie where a bigoted cotton plantation owner, Endicott, played by Larry Gates, feels accused of a crime and slaps Tibbs. And Poitier as Tibbs shocked audiences around the world when he delivered an even harder slap back to Endicott.

The director says, “As the film echoed the power of that moment around the world, I think Sidney represented the conflict between people in America.”