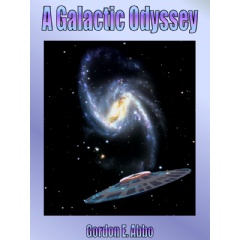 The LA Times Festival of Books will feature Gordon E. Abbo, author of A Galactic Odyssey, in Spring, 2022. This is the third book in the Two Worlds Epic series that has sci-fi fans swooning for its new releasepacked with action, thrills, adventure, romance, and surprising revelations that will keep readers turning pages.

The story begins when an amateur astronomer, George Abooli, encounters a race of friendly aliens called Reptons who want to make contact with the humans, and they work with George in establishing such. However, trouble is brewing in the Middle East with the threat of war.

The third part of series, set in the future, tells of humanitys return to Earth after the devastating nuclear holocaust which has resulted in worldwide disaster, forcing the survivors to retreat to the thriving human colony on planet Tau Ceti 4.

With the re-colonization of Earth a bust, the Reptons bring their friends Paul Collins and Heather Dixon aboard as members of the mixed Repton/human crew on the Te Laposo, a super starship on a mission to find habitable planets and return to Tau Ceti 4 to report. However, during their journey, a malfunction in the hyperdrive flings the ship and her crew thousands of light-years across the Milky Way. They end up over 50,000 light-years from Tau Ceti with no way to return home.

A Galactic Odyssey brings out the space explorer in readers, transporting them to different planets, making friends with peaceful aliens, battling hostile aliens, and dealing with the dangers of certain astronomical phenomena. On top of that, Gordons third book is a vision of the future in which he not only knows about astronomy and space travel, but also about the human condition and the perils of living. There is a lot of social commentary.

According to J. Weldon, Amazon reviewer, there is the urgency of warfare, suspense of being lost in space, plus meeting of a variety of life and lifestyles on the various planets, which makes it difficult for readers to put down. If you like Star Trek, youll like these books.

Interested? Get a copy of Gordon E. Abbos A Galactic Odyssey on Amazon and come visit the upcoming LA Times Festival of Books in Spring 2022.

This news content may be integrated into any legitimate news gathering and publishing effort. Linking is permitted.